OUR MONTHLY MEETINGS AT LEIGH WESLEY METHODIST CHURCH HAVE RESTARTED 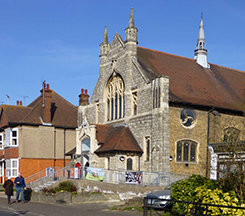 PLEASE NOTE THAT DOORS ARE NOT OPEN UNTIL 2.00PM. AS SPACE FOR QUEUING IS LIMITED, PLEASE DO NOT ARRIVE TOO EARLY (especially when cold or wet!)

Meetings will usually start with notices and items of group news, followed by a guest speaker. Refreshments are available afterwards so members can chat to friends or maybe the speaker.

Please note that we are not permitted to use the car park attached to the church; however, there are small pay-and-display car parks in Elm Road (at rear of Leigh Community Centre/Police Station) and off North Street (east of the Wesley Methodist Church) but these do fill quickly. Parking on nearby streets is limited so please check local parking restrictions.

A royal burial site found between a pub and Aldi supermarket has been hailed as the UK’s answer to Tutankhamun’s tomb.  Workers unearthed the grave, which contained dozens of rare artefacts, during roadworks in Prittlewell, near Southend, Essex, in 2003.  Tooth enamel fragments were the only human remains, but experts say their “best guess” is that they belonged to a 6th Century Anglo-Saxon prince.

It is said to be the oldest example of a Christian Anglo-Saxon royal burial.

Now, after 15 years of expert analysis some of the artefacts have returned to Southend to go on permanent display for the first time at the Central Museum.  Chris Langdon of Southend Museums Service is going to tell us about his work with this and other research

This meeting will take place via Zoom and details for joining will be emailed to members ahead of the meeting.